Gamergate has brought a lot of attention to the harassment of women in the game industry, so much so that various friends and family have started asking me about my experiences. I’ve been lucky enough to escape attention from that howling mob, in part because I’ve never spoken out much about women or gender in the games industry. 100% of my time in the game industry has been as a founder, and developing a platform rather than individual games. My experience has been generally quite welcoming but I felt perhaps too atypical to contribute much to the conversation.

But all the questions made me think more deeply about my experience, particularly the low-level harassment I get that I’d taken as a given, normal for a co-founder of a game site. It occurred to me to check with my brother/co-founder Jim, but he said he almost never gets hassled.

Most of the harassment I receive is through Kongregate’s messaging system, and looking at my last 25 public messages mixed in with compliments and requests for help there are several harassing/sexual messages. Jim has none.

In the 7.5 years since we launched the “shouts/whispers” messaging functionality on Kongregate we have received almost exactly the same # of messages: 2,513 for Jim, 2,487 for me, roughly one per day. They are mostly spontaneous messages from users, with occasional spikes when one of us has been more active than usual in the forums, or has made a major announcement. 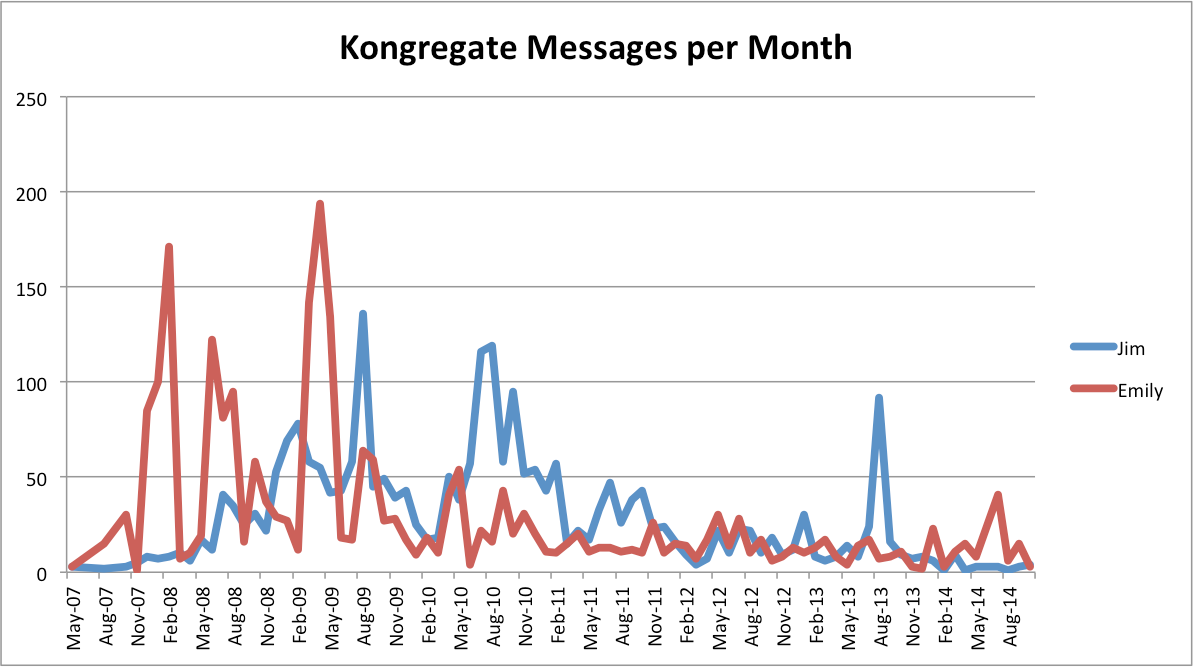 Checking the text of all 5,000 messages (some public, some private) I found only nine harassing messages for Jim, two with sexual content, backing up his sense that he is almost never hassled: once a year doesn’t leave much impression. Among mine 36 were harassing, nine with very sexual content. That’s 4X the amount of harassment Jim receives, and a slightly higher multiple on sexual content. Incest is a common theme among my messages, interestingly, involving Jim while only messaging me.

This is not a perfect comparison, of course, as Jim and I have slightly different relations with the community and the overall level of harassment is not high. We invest quite a bit of effort into moderation of forums, chat, etc, and active players on a site are likely to hold the founders in high esteem.

It is, however, about as close to a natural A/B test as you’re going to get of the difference in treatment between a publicly known male and female in the game industry. Jim and I not only founded Kongregate together but have run it together (he was CEO originally, I’m CEO now), and have had similar levels of involvement and profile within the Kongregate community since the start.

We’re both known amongst developers in the industry but not beyond that, have similar #s of Twitter followers, have not been outspoken about gender or other flashpoint industry issues that generate the buckets of vitriol that have been dumped on Anita Sarkeesian and Brianna Wu. And yet every few months I get a message like this, and he doesn’t:

It’s pretty easy to look at these messages and see young males acting out in hopes of attention. But what societal and psychological dynamic is at play that they target a female at such a disproportionate rate to a male?

Running these numbers through a statistical significance test confirms what should be obvious to anyone following Gamergate: with a 99.9% confidence level it is harder to be a woman than a man in the game industry, independent of what you say or do.