Ads in mobile games are more popular than ever. Ads can come in the form of interstitial banners, non-rewarded video, rewarded video, offerwalls, and other native forms. Some games, often casual, can be solely supported by ad revenue. Even for games with options for in-app purchases (IAP), Kongregate typically finds that in-game ads can account for 10-50% of all revenue.

This “ad”ded revenue is nice but often lives independently of IAP revenue, typically in the dashboard of various ad networks or your mediation solution. Developers should be looking at both the revenue generated from ads and IAPs in order to determine ARPU, as we do at Kongregate. If you are running paid marketing campaigns for your game, this is essential to acquiring as many new users as possible.

Demand for ad inventory outstrips supply. Acquisition marketers constantly compete for ad impressions against other games and big brand advertisers. Some of these advertisers are willing to pay premium CPMs and, because supply is limited, they are “winning” the bulk of the ad auctions. This has created an ecosystem where ad display is not linear based on CPM and is actually a power curve in which a few winners take the bulk of all impressions.

Below is an example of how we at Kongregate find impressions get distributed based on the CPM your ads generate for networks (example based on United States traffic): 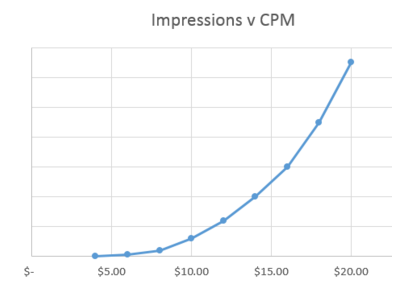 In this example for 1,000 users the average revenue per user (ARPU) increases 25% just by including ad revenue in the calculation:

As you can see from the power curve chart above, the difference in impressions (and likely users) between a $10 CPI bid vs $12.50 could net a 100% increase in impressions and traffic. There is always a tipping point where your traffic will increase exponentially relative to the increase in your bid.

The easy way to count your ad revenue is to create an association of ad revenue per user: a "revenue per impression" number. Sounds nice, right? Unfortunately, it’s not that easy. Network ad servers are changing bids based on game, geo, CPI bid, click-through rates, conversion rates, and CPM across hundreds, if not thousands, of bidders vying for impressions in real time. Due to these complexities, few networks are able to create a true "revenue per impression" figure. Until this happens, you will have to do some estimation to create a directionally accurate ARPU to maximize your bids.

First, create a system to count your in-game ad impressions on a per-user basis (as we do for all Kongregate games). This system should track every ad type individually, as the revenue per ad type can vary significantly.

Next, download your ad revenue data and calculate your average revenue per impression. It is typically best to do this both by individual ad type and geo, as the value for each can vary dramatically. Below is an example:

Finally, roll up your ad revenue into your IAP revenue to create a true ARPU. Best to do this on as granular a level as possible, such as by geo and network:

In the example above you can see how the inclusion of ad revenue dramatically changes the value of each marketing source. You can now raise bids where it makes sense to maximize traffic and lower bids that are not profitable.

It is important to keep in mind that bids alone do not dictate traffic volume for paid marketing. Your CPM is also determined by the click-through rates of your ads and the conversion rates of your app store page. I will save that for a later post.

Kongregate believes in-game ads are a way to drive a substantial amount of incremental revenue. Kongregate makes it a best practice to track all ad types and model out ad revenue by source in order to run the most effective marketing acquisition programs possible.