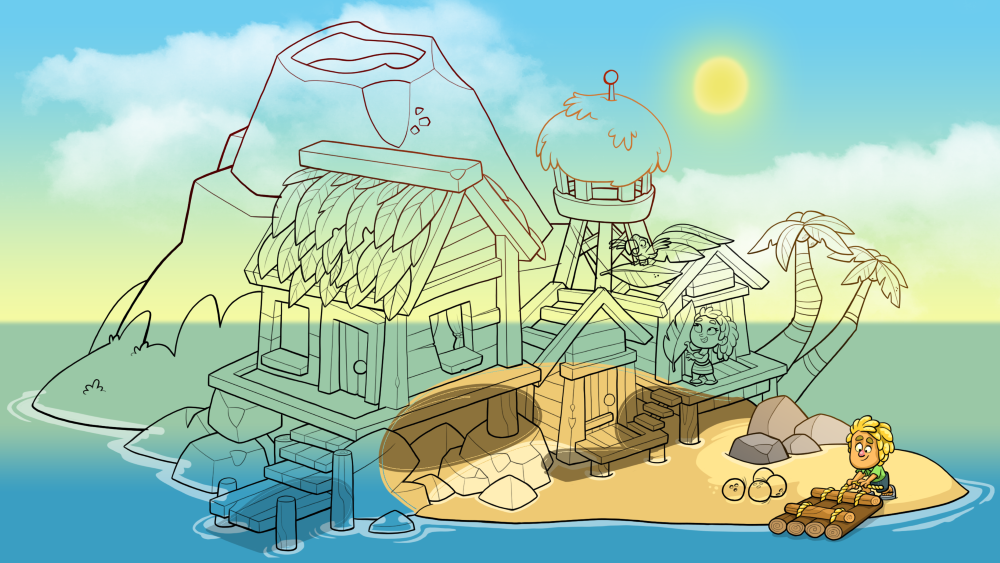 We sat down with the co-founder of Synapse Games, Alex Reeve, to explore their newest launch Castaway Cove, an idle game set on a far-off deserted island. Synapse is responsible for hit titles like Animation Throwdown: The Quest for Cards, Spellstone, and Tyrant Unleashed. When not developing games, he’s busy playing Dominions 4 and XCOM.

KONG: Even though many people reading here on Kongregate may be aware of Synapse and the games you have developed over the years, do you mind reintroducing yourself? What is the short history of Synapse?

ALEX: Sure! We started making Facebook games way back in 2008. The first of our games to gain a significant amount of traction was called War Metal, which was a multiplayer web RPG game set in a dark, futuristic world. It was a lot of fun to work on, so we ended up making a spin-off/sequel called War Metal: Tyrant. This was a CCG built in the same world. We ended up launching this on Kongregate, and we fell in love with Kongregate and the community right away.

KONG: Synapse has been primarily focused on card battlers; what drew you into the idle genre and how did the Castaway Cove theme/game come about?

ALEX: A lot of us are addicted to idle games like AdVenture Capitalist and Pocket Politics, so we wanted to take a crack at it! We've done a lot of mid-core competitive games, so it was a big departure, but it's been really fun for us to try out a more casual game and theme.

KONG: What challenges did an idle game present that you hadn't encountered developing your previous games? Did you learn anything new about developing games while working on Castaway?

ALEX: The biggest challenge for us was focusing on simplicity and having a really smooth on-boarding experience. Our previous projects have all been significantly more complex, both in terms of mechanics and in terms of UI/UX. We really had to rethink our process to understand how a new player experiences the first part of a game. We're hopeful that this experience will translate to future projects -- even ones with more complex later-game systems.

KONG: What is the biggest satisfaction and concern when launching a new game, particularly when the game is so different from previous ones?

ALEX: The best part is the development itself. It's quite a thrill to try something totally different and to figure out what works and what doesn't. That was also the biggest concern -- learning a new genre during the development process. As all developers know, it's one thing to play a game, and quite a different thing to make one. We launched Castaway in test markets very early on and spent the vast majority of the development time seeing how real players played the game. We had to try a lot of different things (and make a lot of mistakes on the way!) to really understand the genre.

ALEX: Absolutely! The Castaway development was a lot of fun and it's been great to explore new genres. We're starting to spend a lot more time looking at more ways to incorporate other genres into our games and experiment with new systems and gameplay.

KONG: With over 10 million downloads and multiple games released, what do you think has been the most significant accomplishments and learnings along the way?

ALEX: The accomplishment I'm most proud of is being a part of such an awesome team. There's such great camaraderie and teamwork, both within a project and across projects. Our game portfolio's success is 100% due to having such a close-knit and fun group of developers working together.

KONG: Does Synapse still have an indie developer feel? If so, how have you maintained that, and what benefits/disadvantages come with it?

ALEX: Yes, it definitely still has the indie developer feel. We are generally working on several active titles at any given time, so Synapse is really split into a few small teams of 6-8 people, and the indie vibe is a pretty natural consequence of that structure. For the most part, it's great! Everyone's able to work together on design decisions and roadmapping. Sometimes it limits the speed at which we can create new features, especially compared to much larger studios. That's probably the biggest disadvantage.

KONG: Castaway Cove is set on a deserted island, which is very different from the themes in your current games. If it came down to it, would you rather be stuck in space battling aliens or stuck on a sandy beach battling sand in your trunks?

ALEX: Why not both? There's some strange things hidden on the Castaway islands!

KONG: Any sneak peeks or hints on what is coming up next for Synapse?

ALEX: We're going to continue to build on our card battler experience combined with some big new twists in gameplay inspired by other genres. Players familiar with our existing titles will also probably see the return of some familiar characters and worlds. :)