Illustration by Jenny Graf, made with Barles Charkley’s Shut Up & Paint!

The 41st Ludum Dare is this weekend, and, like me, many of you are probably getting excited about the opportunity to make something new this weekend. Game jams are game development distilled into its purest form and are a wonderful thing.

Some of you may be feeling like you’re not ready, or like you’re destined to fail. If you’re not sure if it’s for you, I’d encourage you to just give it a try! It will only cost a couple of days' time. There are no budgets, no stakeholders, and no one is expecting to be topping any charts. Game jams are about expression, and there are no rules about what your game needs to be in order to “succeed.” Your game is whatever you make it to be.

What is a game jam?

A game jam is a game-making event where participants have a limited amount of time to make a game. That’s it!

Game jams have been around for a long time -- the first Ludum Dare event was in 2002 -- and they have grown and changed over the years. In the past they were primarily events like Ludum Dare and the Global Game Jam, generally focused around making small games in a weekend, but thanks to tools like itch.io it has become very easy to host your own game jam and the number of jams has exploded.

Ludum Dare is 48 hours long, but some are months, weeks, days, hours, even no time whatsoever. Some are heavily organized social events, like the Train Jam, a game jam where hundreds of developers gather on a train from Chicago to San Francisco to participate in a 52-hour game jam, and some have practically no organization at all, like this image of a fish.

Game jams can be irreverent, like that image of a fish, and act as a form of play themselves. They can be used for activism, like #ResistJam, a game jam about creating games that resist oppressive authoritarianism. And they can be products of culture, like museum jam, a game jam based on art by Pippin Barr about making a game that takes place inside or outside or tangentially around some kind of museum, or molyjam, a game jam about making real games from out-of-context statements made by Peter Molyneux.

Game jams can be about experimentation, education, play, and ultimately, whatever you want them to be about. Most game jams have a specific theme or topic they’re centered around, but really, they’re about taking the opportunity to create something you want to create. And if you have an idea for a game jam and there isn’t one that meets your needs, you can start one! My colleague Jenny Graf and I recently threw together a game jam about making kusoge and had a great time.

But what if I don’t know how to make a game?

That’s perfect! Even in the post-indiepocalyptic landscape there are still so many solidified ideas about what games are made of, and it’s still ripe for new ideas from industry outsiders. A game does not have to look like what you might think a game looks like, and in the context of a game jam, financial and commercial viability isn’t something you really need to be concerned with at all.

If you need some inspiration, here are a few examples of some of my favorite jam games:

here is my #flatgame
it's called

✭ and i made sure
to hold your head
sideways ✭

How do you do it? by Nina Freeman, Emmett Butler, Joni Kittaka, and Decky Coss 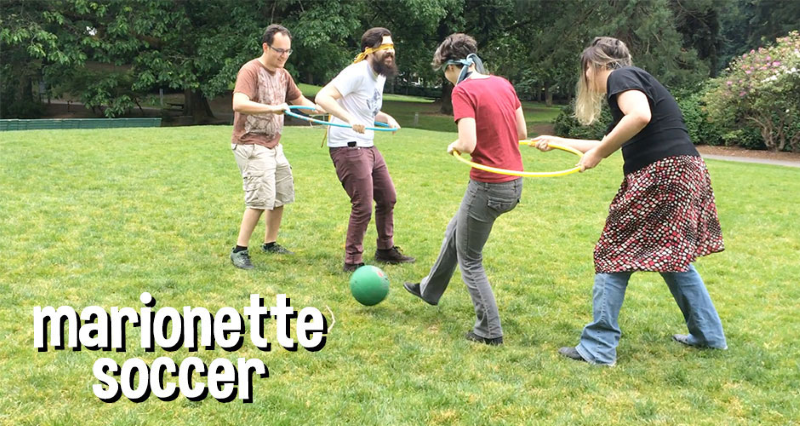 The best thing you can do to get into game jamming is to just get started! There are many tools available these days to make jamming easier. Fernando Ramallo recently released Doodle Studio 95, which seems like an amazing tool to jump into, and there’s nothing stopping you from making a game with physical components and keeping the sound, art, and code work to a minimum.

If you need somewhere to host your web game, you can always upload your game to Kongregate for free, and if you’re still not sure where to start, there are tons of other free tools available you can use to make your game. It’s the last day to vote for this weekend’s Ludum Dare theme, so sign up, vote for a theme, and join me and thousands of other developers in creating a game in 72 hours this weekend!

Kayla Bayens contributed to the outline of this article.