Since 2002, pop culture has been swarmed with waves of undead ghouls, gnawing their way into our hearts and leaving us jumping at every shadow, expecting a slowly clawing limb or a chomping, hangry monster to bust out of a forgotten doorway. The gaming world has had its fair share of zombie games, from Dead Space and The Last of Us in the shooter/adventure world to Plants vs. Zombies and State of Decay in strategy.

Starting in 2011, the Rebuild series has been a cornerstone of Kongregate. Both the original game and its sequel find many enthusiastic zombie-killing players eager to take back civilization from the dead. With a combined total of 13 million plays, Rebuild & Rebuild 2 have gained many fans over the years. We cleared out neighborhoods, rebuilt towns and signed constitutions while fighting off swarms of ravenous chompy enemies with the aid of repurposed tools, good good dogs and human determination and grit. With Rebuild 3: Gangs of Deadsville available on Kartridge, we were pleased to have a chance to chat about infectious bites, electric fences and post-apocalyptic politics with Sarah Northway, developer of the Rebuild series and one of our awesome friends from Indie Megabooth. 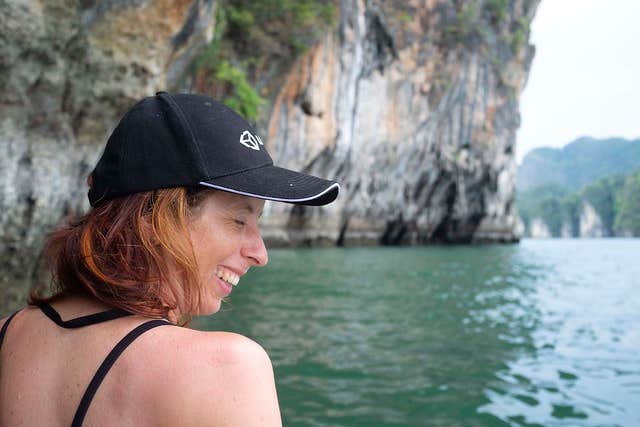 Tell us about your Development team. Do you have a small crew of friends working together on your project?

Yes! I'm the only full time member of Northway Games, but for Rebuild 3 I had plenty of help with the art, writing, code, sound, and music.

How long has your team been together/how long have you been developing games?

I've been developing games for ten years. I always work with a different team, and sometimes with my husband Colin. I got started as an indie dev in 2009 when I released Rebuild 1 on Kongregate.com! 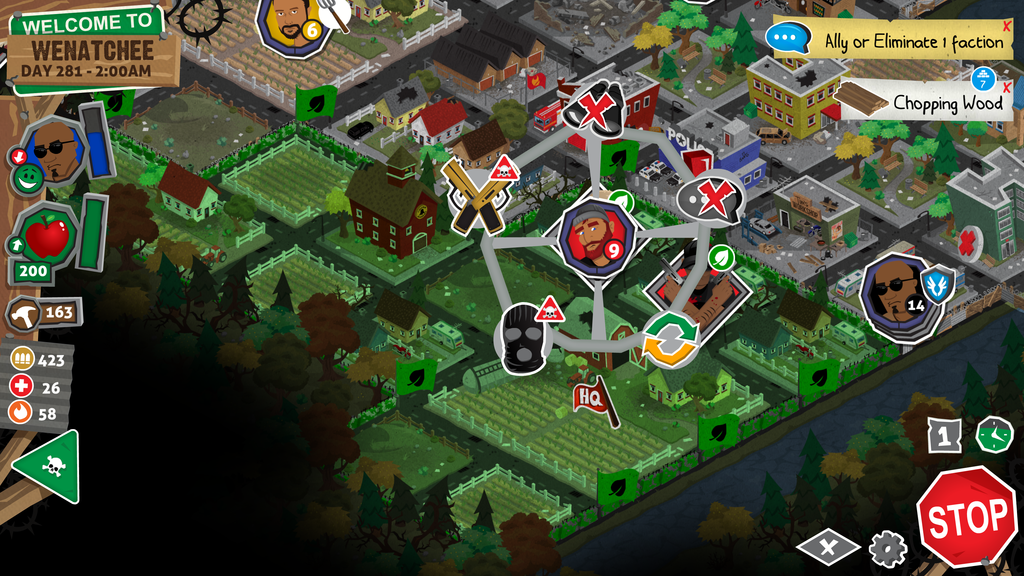 Prior to designing games, were you a game enthusiast?

Oh heck yes. I've been in love with video games since the days of the Amiga and original NES. 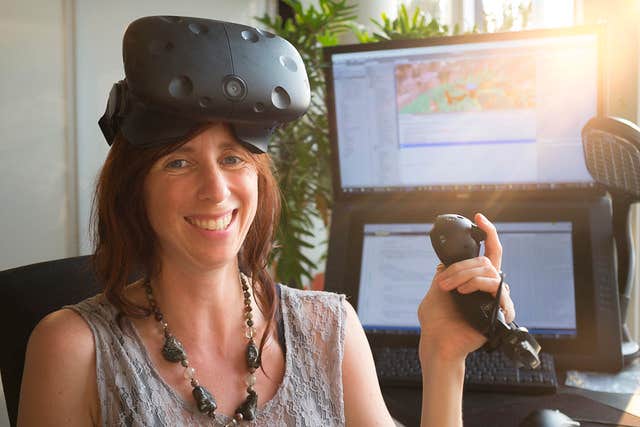 What are your favorite games or influences?

I love Bethesda's Elder Scrolls series -- that open world style of western RPGs is my happy place. And I'm very partial to sim/strategy builders like Civilization, Sim City and Dwarf Fortress, which the Rebuild series takes inspiration from. I play a lot of puzzle games and card games. Magic: The Gathering is in my top 10. And of course a ton of indie games of all genres. 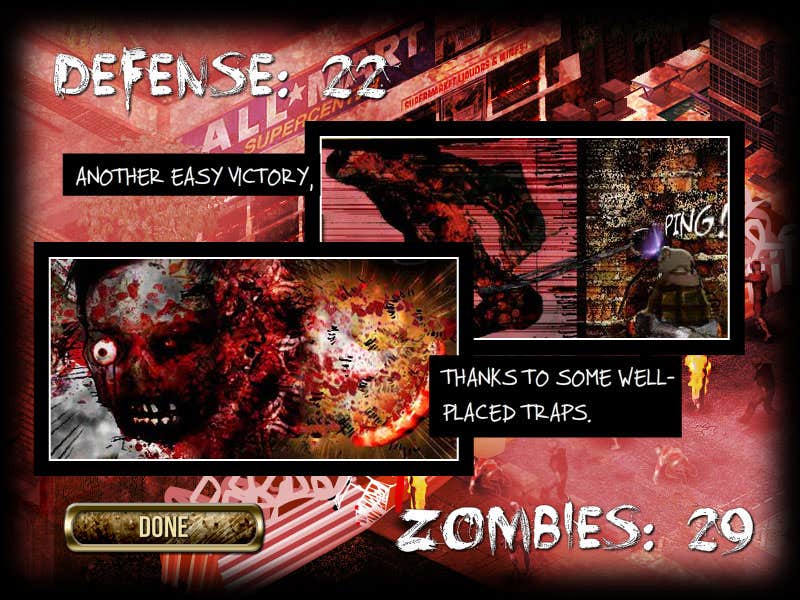 Oh, and I read and watch a lot of horror. I lived on Stephen King as a teen. George A. Romero's Dawn of the Dead is among my favorite movies and another inspiration for the Rebuild series.

The Rebuild series breaks with a lot of zombie survival games, in that most of the focus is on the day-to-day and the little things that keep a settlement going. What about the building/simulation genre made this path so appealing?

Sim games are great vehicles for storytelling, generally through their mechanics. I wanted to offer more tidbits -- those little stories of post-apocalyptic life -- so that players could take these and weave them into their own narratives.

The Rebuild series’ artwork is unique and eye-catching! What inspired the character and building designs in the game?

Collaborating with Evil Kris on the gory realistic portions of Rebuild 2 was a blast. We worked in opposite time zones and I never knew what I was going to see in my inbox every morning. At the time he was also working on his own game series (The Insanity) and the things that came out of his head... well I think sometimes they frightened both of us! I was keen to make each iteration's art stand out as different from the last, so for Rebuild 3 I wanted to go back to the clean vector art (which I'd adopted because it was what I could do with limited art skills and a mouse) look but add more style and humor. Adam Meyer (now of Steamroller Studios) was the perfect artist for this and what you see is really his style.

How did you come up with the idea for your game?

It was a kind of a quick sketch I'd made for a jam game, one of several I started on shortly after my husband and I quit our jobs and "went indie". I liked the idea of a city builder where the city was already built; you just had to conquer it.

How did the whole series start?

I wrote a 3-day jam version in 2009. Zombies were kind of a placeholder initially; an easy enemy to design because they just walk forward. The idea of personal stories and factions and all that came later. Rebuild 1 took about 3 months to write, and I built it in Flash and put it up on Kongregate.com. Ah, good old Flash!

Some of my early playtesters didn't like all the reading in Rebuild, so I didn't know what to expect. But it flew up to the top of Kongregate's front page and was an instant hit. Of course I had to write a sequel... 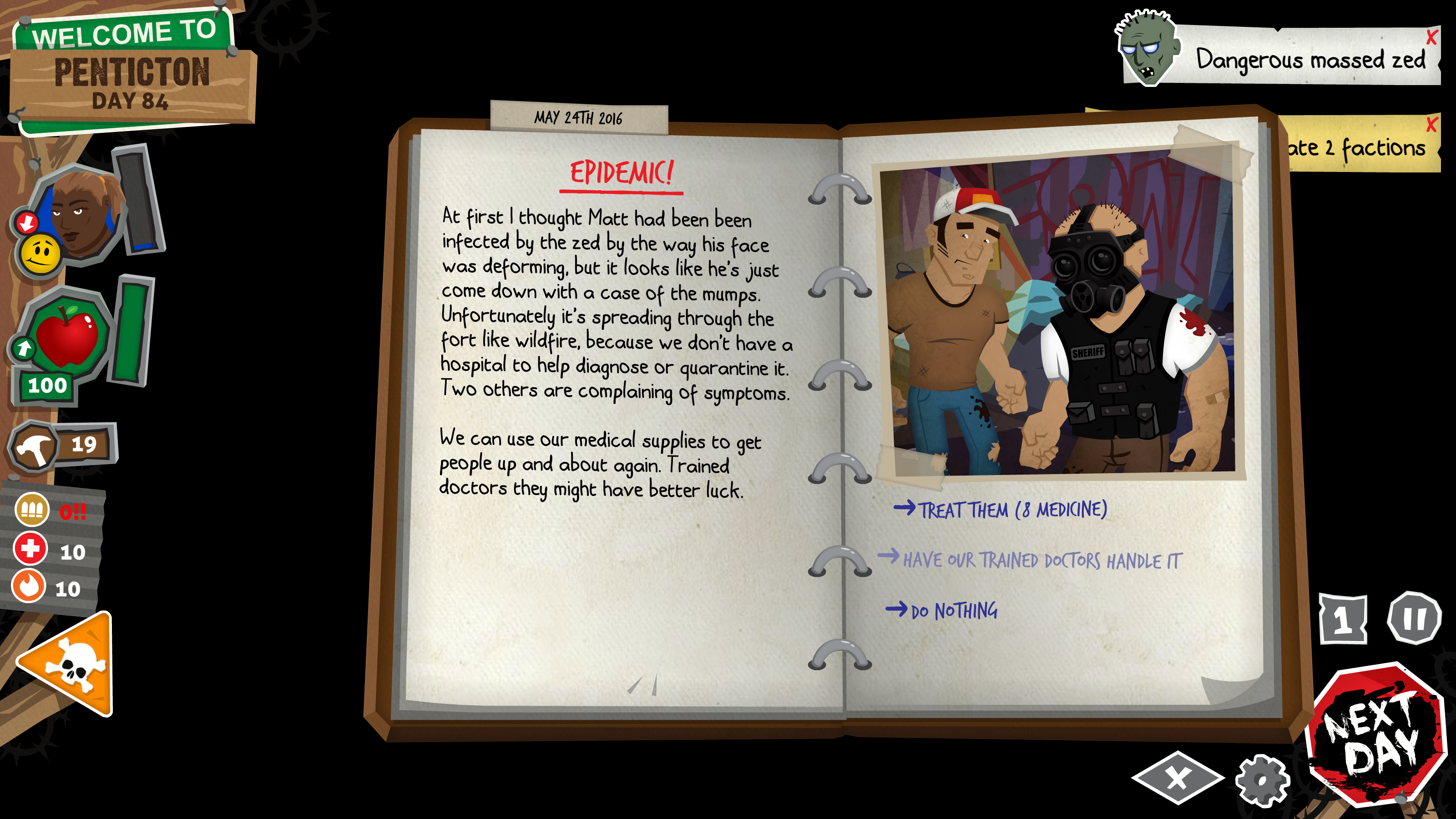 Having played a lot of Rebuild and Rebuild 2, I keep finding things in Rebuild 3 that make me go “ooooh that’s new.” During some Zed attacks, players are given choices on how to handle the assault based off the nearby survivors and their equipment. How did that come about?

It was actually something I'd wanted to put into Rebuild 2 but didn't have time for. I felt like just watching a combat play out was a bit unsatisfying. I wanted to be able to tweak those dice rolls, just a little bit, and to feel like I was there on the ground during the attack even in cases where a tweak isn't enough to save someone.

Rebuild 3 is in many ways the "real" game I'd wanted to make all along. Of course, it took 3 years to write, whereas Rebuild 1 only took 3 months! 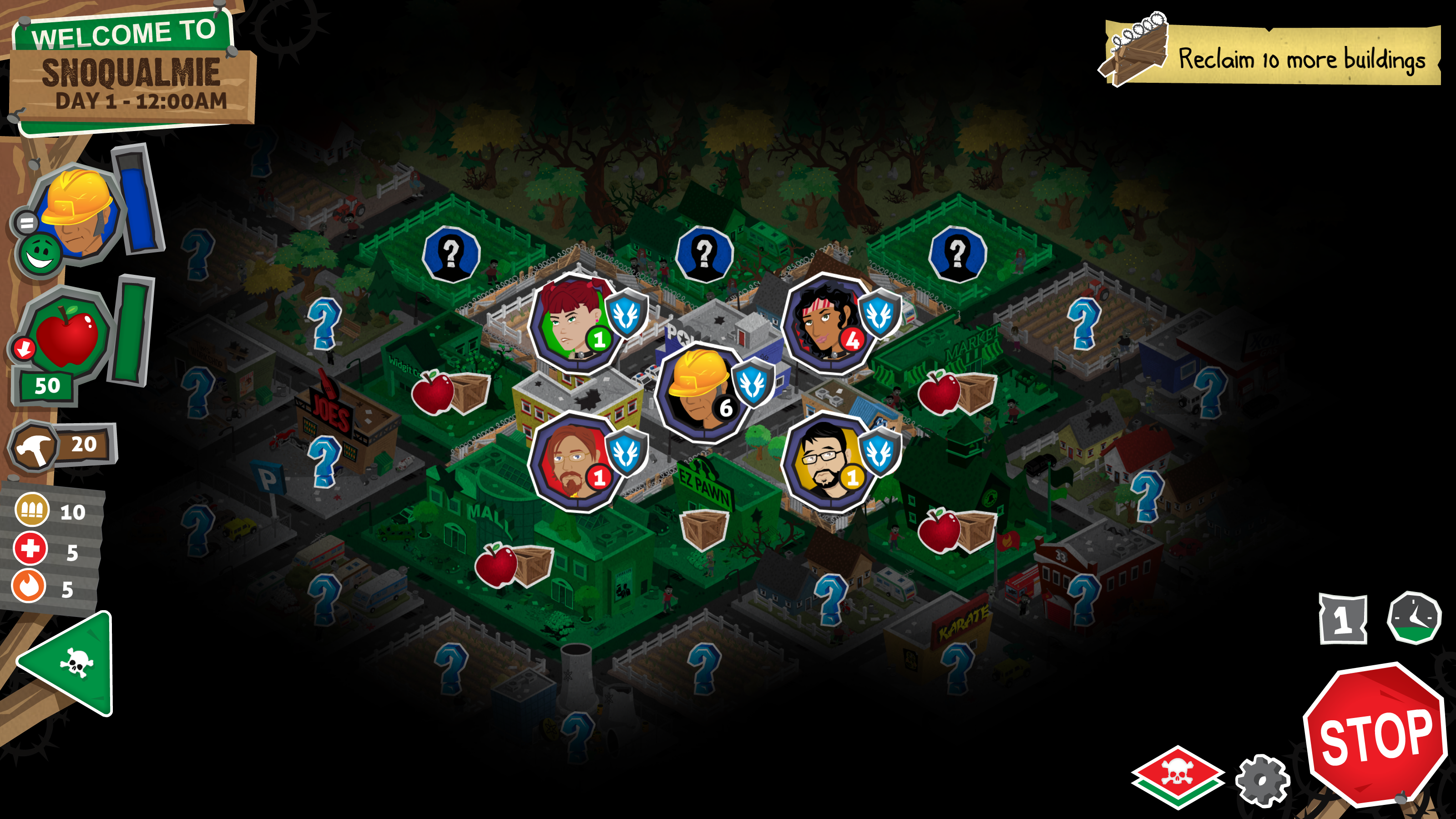 I noticed that Rebuild 3 includes a variety of time progression options, something that has really expanded from the first couple of games. It feels like the action is continuing while you’re expanding your borders or waiting for a Zed attack. What brought about these additions?

With Rebuild 3 I added a real-time mode not to make it more intense (which it can be) but to help chill those feelings of perfectionism. Sometimes it's more fun to be forced to say "that's good enough" and move on to the next thing that needs taking care of. I did add a pause button of course; I'm not a monster! 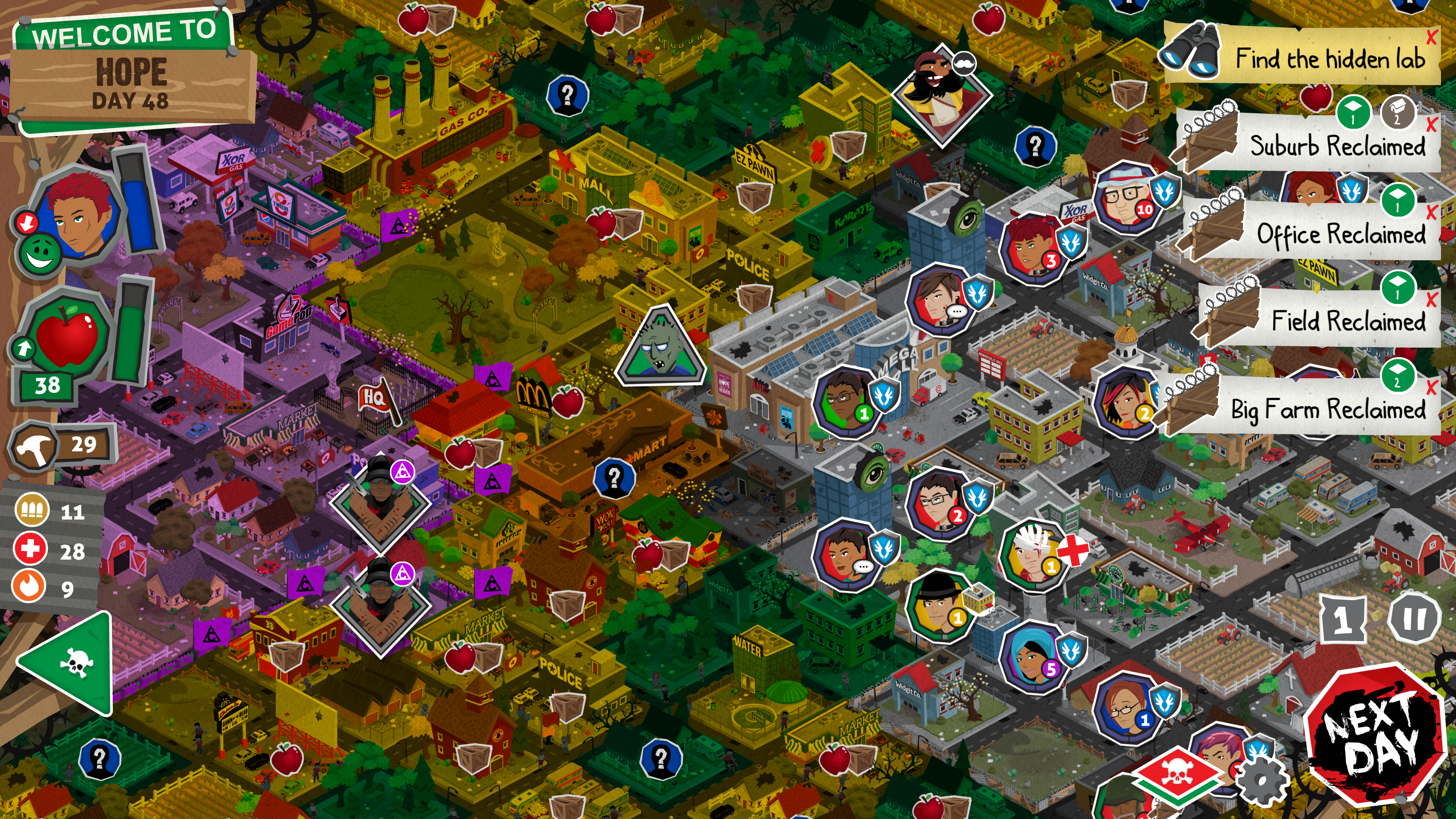 What sort of experience do you want your players to have?

I've decided I can't tell people how to play Rebuild. For Rebuild 3 I spent a lot of time talking with the community and figuring out what they wanted in a third game. We had a communal Ideas Wiki, a Kickstarter, and a year of beta access.

Personally I like to play on Hard difficulty and be on the edge of losing at all times. But many players just want to zen out and build a big city, so I have a lot of content in the game just for them.

Is this game about building? Competing? Exploring?

All of the above. Maybe some storytelling and collecting in there too. And cleaning. When I think about it, it has a certain something in common with Viscera Cleanup Detail.

What is your favorite part of this game?

I love the Chosen Ones faction. I love how much players hate them. Sorry, not sorry. 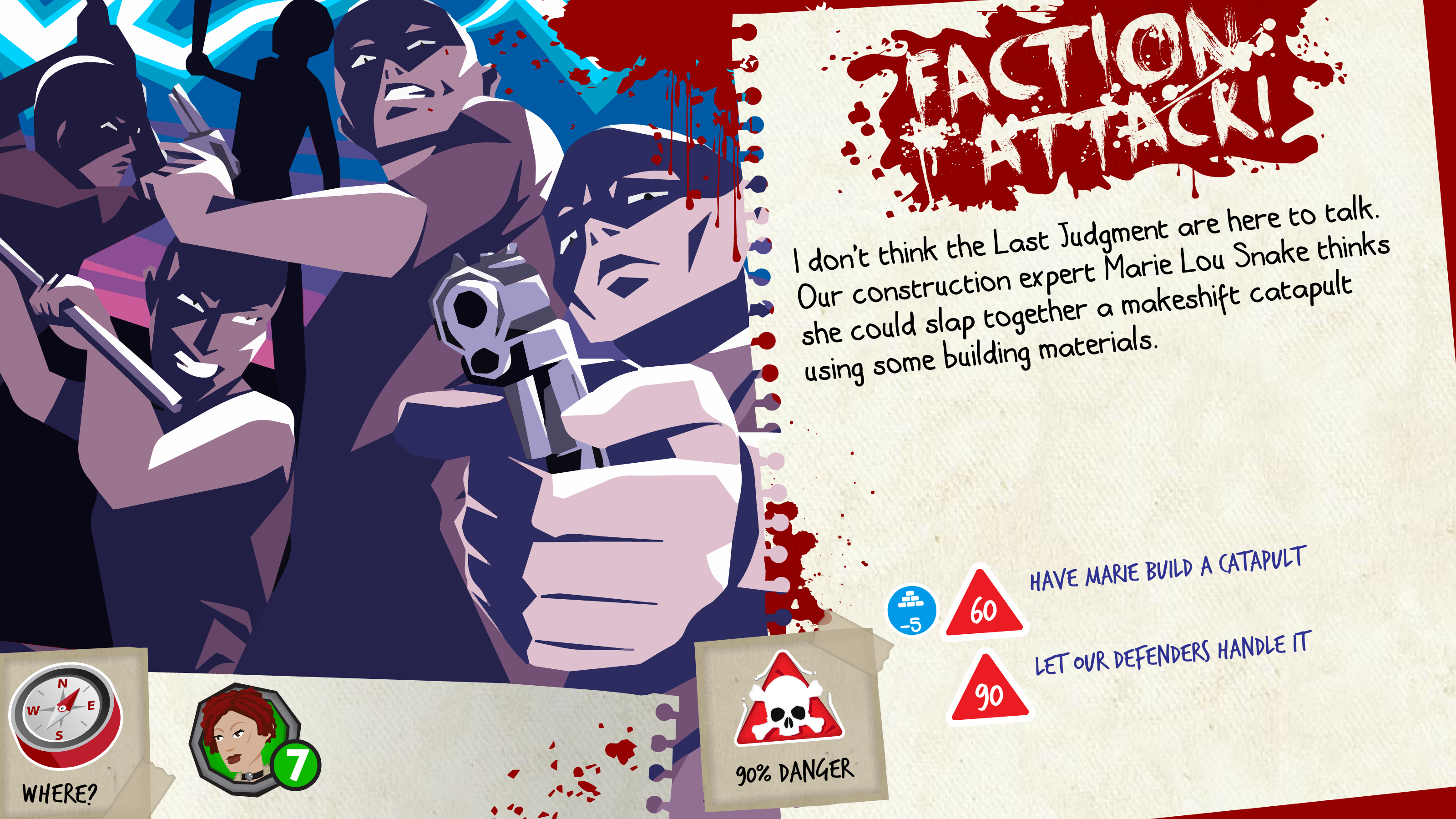 What are your next plans?

I'm working on a sci-fi life simulator called I Was a Teenage Exocolonist. After that... we'll see!

What sort of programming resources did you use?

Google and StackOverflow.com; that covers just about everything.

The Rebuild series was written in Adobe Flash / Adobe AIR. At the time it was great: easy to play in your browser, great 2d animation tools, PC/Mac/Android/iOS compatibility, and great support. I've since moved on to Unity, but Flash will always have a place in my heart. 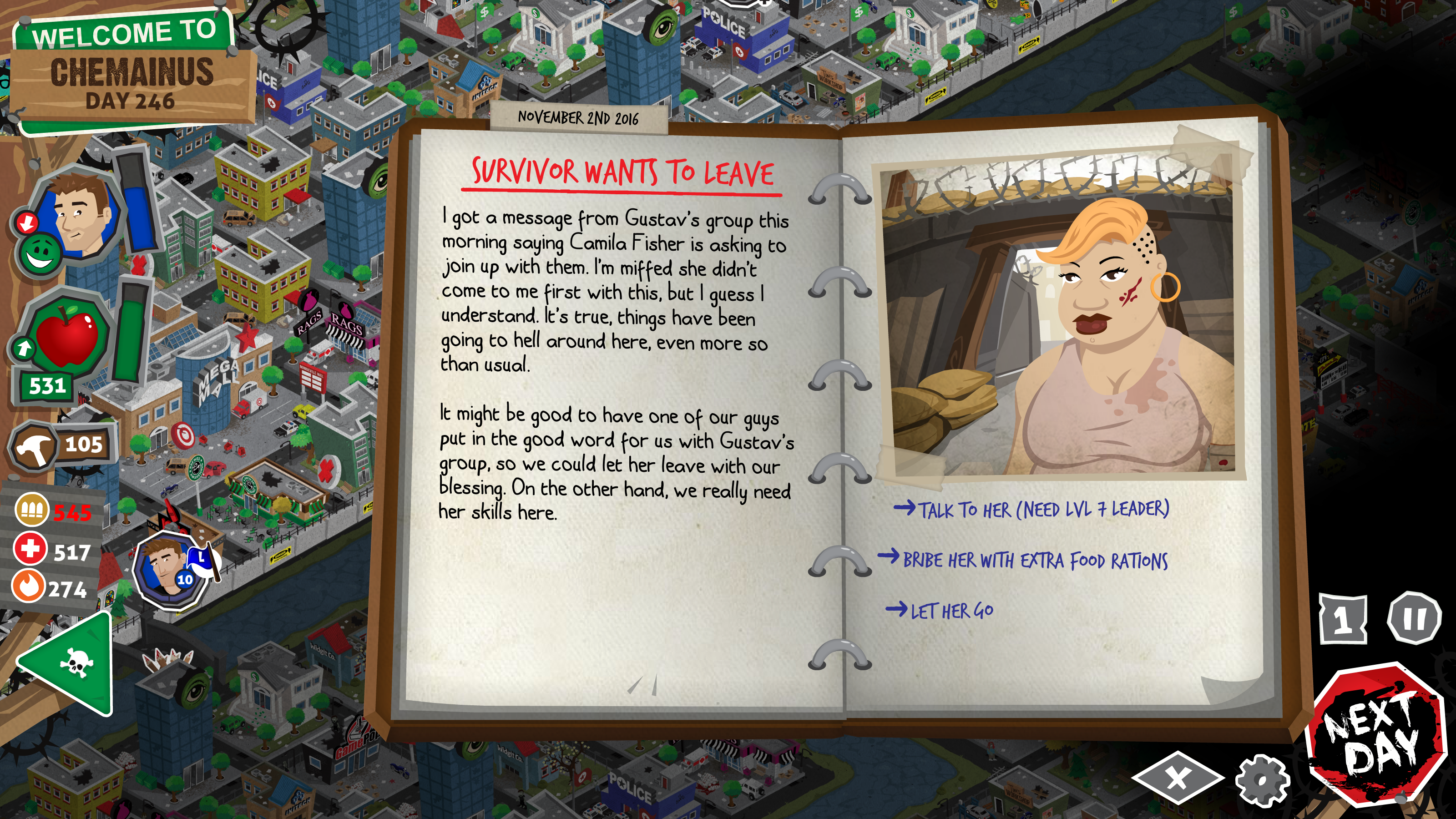 Get techy with us!

Well, did you know that Adobe AIR supports GPU rendering and 3d graphics? It's much faster than doing everything through the CPU. Although Rebuild 3 looks as 2 dimensional as the first two games, it's all secretly rendered as 3D triangles. I used a platform called Starling to make this easy; the same platform Rovio used for Angry Birds!

What made you want to post the game on Kartridge?

I have a long relationship with Kongregate, having published the first two Rebuild games there. They've been played 12 million times on Kong. That's a lot of times! So of course when I heard about Kartridge I wanted to include Rebuild 3. How has the experience gone so far?

Seems like it's going well! It's neat that Kartridge is curated and aimed specifically at indie games.

Did the upload process differ at all from other platforms?

Happily it was straightforward and I managed to get the statistics API in within a day. They even support Adobe AIR for that. 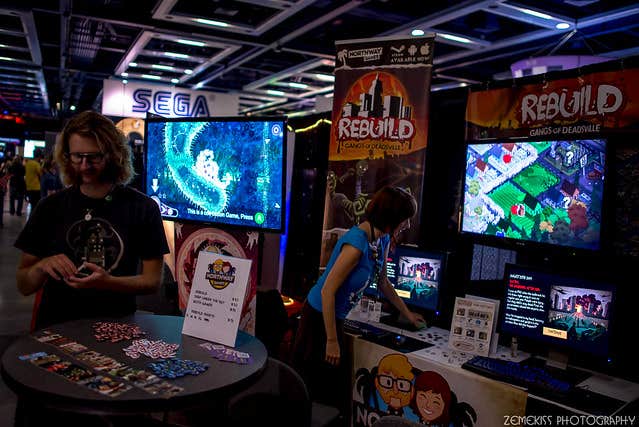 Could you recommend one other game on Kartridge from another developer?

The Indie Megabooth tag features a ton of great games from fellow Megaboothers. Antihero is a strategy / resource management game you might like if you like Rebuild. The developer and I got our start in Flash games while working together. And Rebuild 3 artist Adam Meyer had a hand in it too!

Tell us something else interesting about yourself!

I made the Rebuild series and two other games while traveling around the world with my husband! We lived for 2-3 months in every country and didn't own much besides our backpacks and laptops. We're mostly settled in Vancouver Canada now but have a lot of great memories and photos from that time. 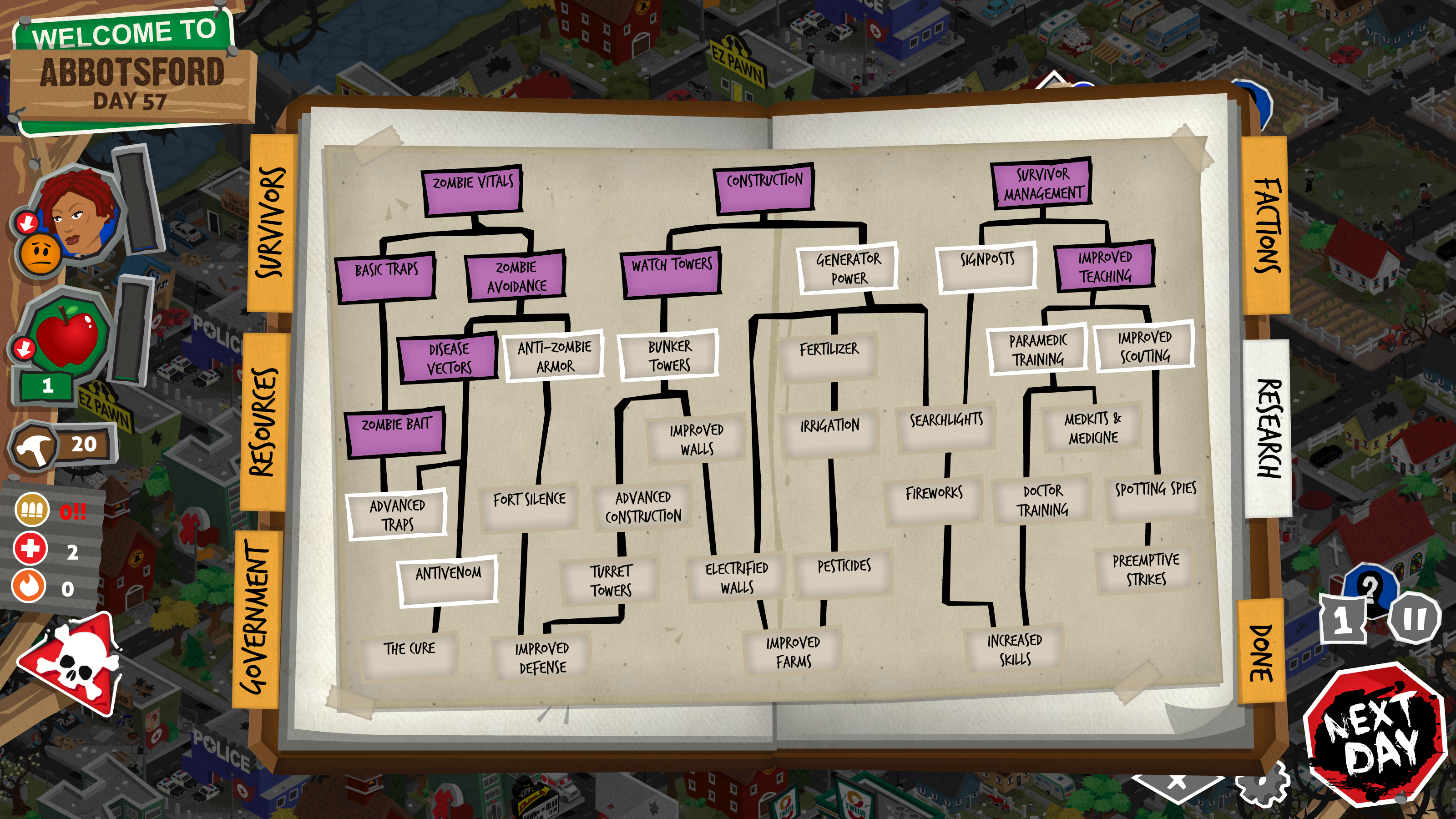 If you were one of the five classes of survivors, which would it be?

Oh an Engineer definitely. All warm and safe in my lab, doing science. They probably won't need a lot of programmers... but I'm a quick learner.

I'm not kidding myself here. I'd probably be one of the first to go. Hopefully quick. And honestly, I've spent some time thinking about it -- better a quick death then the life of a survivor, at least in my games!

Come check out Rebuild 3 on Kartridge! $14.99 gets you all the chompy ghouls you could ever hope to deal with, plus 4 badges worth a total of 285 XP! You can follow Sarah on her website and on Twitter!