Kartridge, the new PC gaming platform from game publisher and developer Kongregate, has partnered with Cuddle Monster Games to launch Hell is Other Demons, the lightning-fast bullet hell platformer! Hell is Other Demons is now available on PC, Mac, and Nintendo Switch.

This arcade shooter is driven by quick, creative gameplay that rewards fast decision making and faster reflexes. Jump into the hooves of a demon out to kill a bunch of other demons as you progress through an extensive campaign and dominate wonderfully over-the-top bosses. In addition to the pulse-pounding maximalism of the campaign, fans of classic, high score-based arcade games will find a cozy home in Arcade Mode, which offers unlimited, procedurally generated action and endless replayability.

Hell is Other Demons’ bold colors and chunky pixels are backed up by a heavy synthwave soundtrack composed by Rémi Gallego, of The Algorithm, and retro sound effects by Magnus Pålsson, composer of the VVVVVV OST.

“Hell is Other Demons started out as a GBJam entry where you are limited to using four colors. Most other entries stuck to green hues, but I felt like going a bit wilder with the color scheme,” says Hannes Rahm, the solo dev behind Cuddle Monster Games. “Firing up Arcade Mode and just getting lost in the flow of bobbing and weaving between enemies and bullets almost becomes meditative for me.” 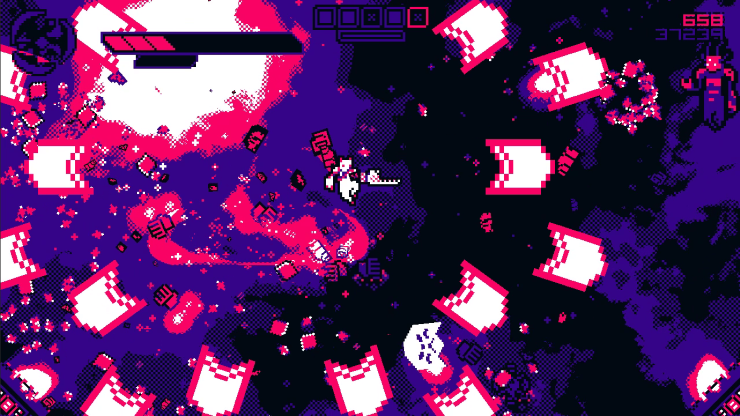 "The first time I saw Hell Is Other Demons was through a lovely gameplay GIF circulating on Twitter. It looked squishy and lo-fi, oozing with thick colors. I hoped the rest of the game would live up to its bold aesthetic. Now Hell Is Other Demons is out, and I can’t stop playing it," writes Ethan Gach on Kotaku. "Twitchy platforming and bullet dodging merge together with the brooding electronic soundtrack to make Hell Is Other Demons feel like a unified, exhilarating whole."

Get Hell is Other Demons on Kartridge and Switch today, and find additional information about the game at hellisotherdemons.com. Get more of the latest news on Cuddle Monster’s Twitter account.