HTML5 has been hailed as the future of gaming in web browsers for years. Back in 2011, however, HTML5 was running into headwinds due to issues with performance and compatibility. There was general optimism about the technology, but few were willing to adopt it for their own games. Things became more urgent recently, though, with the deprecation of NPAPI plugins (i.e. Unity, Java, Silverlight, etc.) and an ominous cloud hanging over the long-term viability of Flash. So where are we now?

For context on the following data, Kongregate.com has had 500-1500 games uploaded every month for nearly a decade, with over 100,000 games to date. We’ve often been known as a “Flash” platform because Flash dominated other technologies, but we’ve actually been an open, technology-agnostic web platform since 2007, also supporting Java and Shockwave early on. We were the first platform to officially support Unity, long before it was ubiquitous, starting in 2011, and we also built native support for HTML5 in 2013.

All of this puts us in a unique position to have a huge amount of data about the adoption of various technologies by game developers. If we look at the types, by filename, of games uploaded to us, we can break nearly all of them into 3 categories: HTML (.html), Flash (.swf), and Unity WebPlayer (.unity3d). Here’s the split of monthly uploads to Kongregate.com among those 3 technologies. (Note: we’re ignoring iframed games for this dataset.) 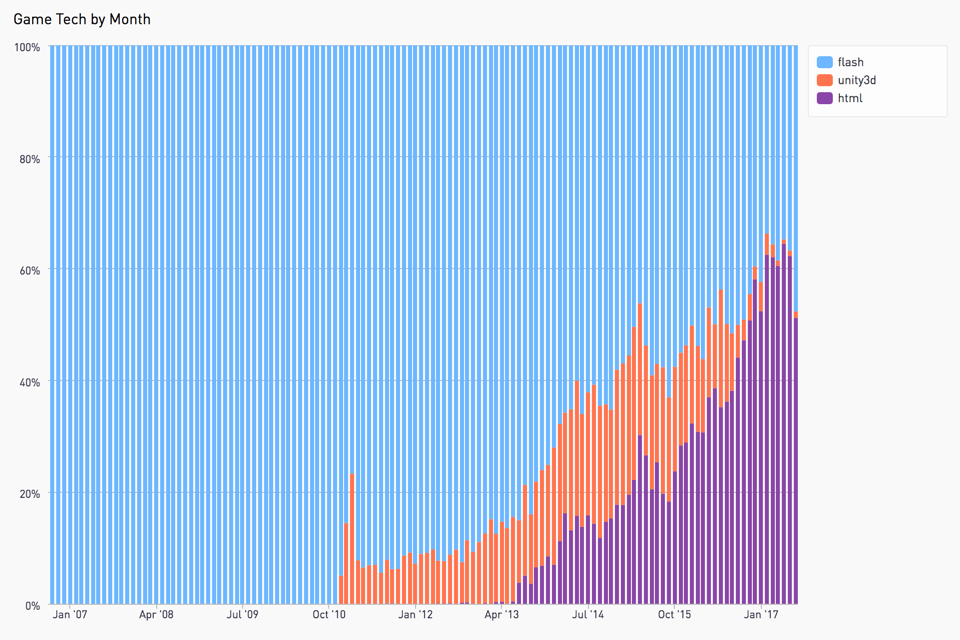 The start dates of the tech should be ignored, as they both coincide with when Kongregate began support for that type of file, not with initial adoption. However, the relative market shares are quite valid. Unity WebPlayer remained fairly popular into 2016, but the deprecation by Chrome in late 2015 meant that few games not yet in development would start using that technology. By the time Firefox deprecated it in March 2017, almost no WebPlayer games were being uploaded anymore. Currently about 55% of uploaded games are HTML5 games. But volume can be misleading if much of the content is low-quality.

We can filter to only use “great” games (better than a 4.0 out of 5 rating) to see what the high-quality split is on an annual basis. We are bundling all NPAPI plugins here, but the vast majority are Unity3D. 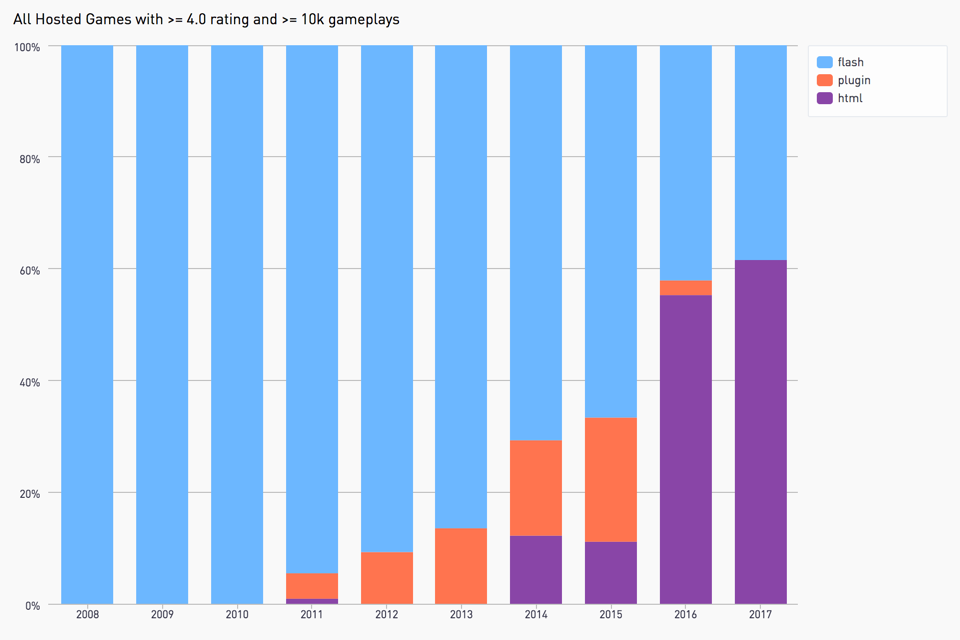 We still see a similar pattern on an annual basis -- NPAPI games phased out in 2016 and most of the great games this year are HTML5. So the overall quality of games is largely unrelated to the tech being used, as we would hope.

What about revenue, then? Here's a look at in-app purchase revenue across all of our hosted games. 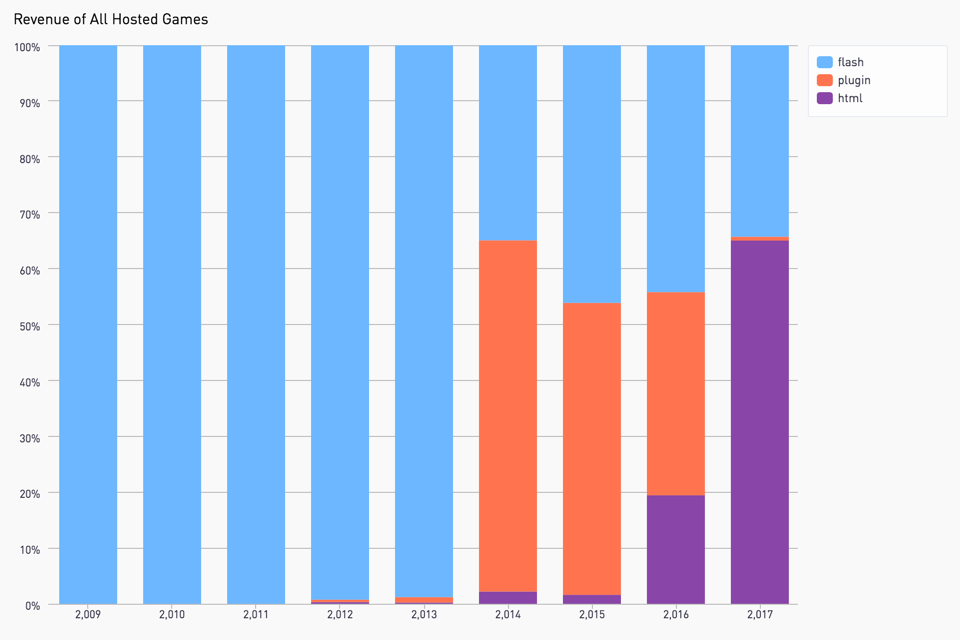 There is again a similar pattern of HTML5 building into this year. The shift is a bit more pronounced because two of our top-revenue games, Tyrant Unleashed and Spellstone, ported from Unity Webplayer to HTML5 at the end of 2016.

And finally, if we only look at new (released 2016-2017), successful (>$10k revenue) games, we see that both the number of games and the total revenue favors Flash, but only slightly. Also note that the sample size here is much smaller than in the above graphs, but big enough to get a rough picture. 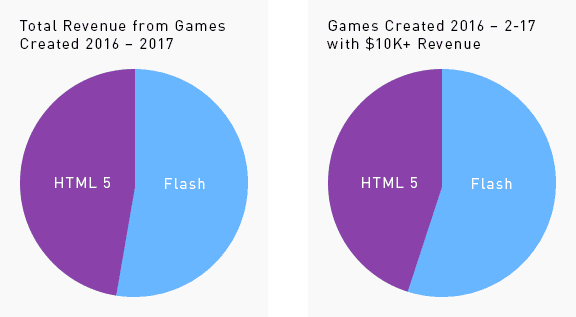 What does all this mean? Kongregate is seeing minimal impact of game technology on the quality and revenue potential of games. While future support is uncertain for Flash, we can now confidently say that regardless of what happens we have another equally capable technology for 2D games. We haven’t yet seen a 3D game that can compete visually with some of the top Unity WebPlayer games, but recent tech demos suggest we aren’t too far from that. Concerns about networking limitations are also lifting as powerful UDP networking libraries for HTML5 are under development.

This is very exciting news for game developers. Nearly all modern browsers support HTML5, Unity’s HTML5 export has worked out many of the early issues (huge file sizes, framerate problems, etc.), and other tools like PlayCanvas, GameMaker, and Construct 2 provide high-quality, competing game engines for HTML5 development. Developers no longer have to rely on 3rd party plugins to ensure that their games can be played. Additionally, with HTML5 working well in most mobile browsers too, cross-platform deployment can be done with a single version of a game instead of creating native apps for each platform. This technology has existed for a decade, but now it has reached a point that it can compete toe-to-toe with plugins.