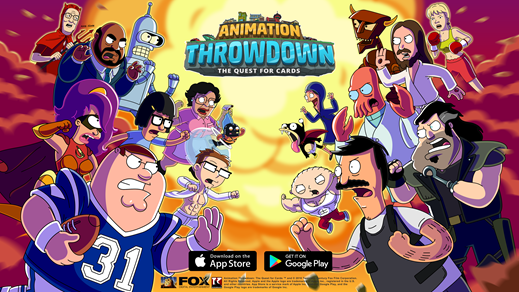 San Francisco, Calif., September 15, 2016 – Order up! Animation Throwdown: The Quest for Cards is now available globally on iOS and Android.

Animation Throwdown: The Quest for Cards is the only collectible card game featuring five hit Twentieth Century Fox animated comedies: American Dad!, Bob’s Burgers, Family Guy, Futurama, and King of the Hill. For the first time ever, players get to assemble their favorite characters and experience iconic show moments in the ultimate deck-building game of domination. Cross-dress with Roger, pimp sweet lady propane in the heart of Texas, stop for a Butterface Burger with the Belchers, and pound a Pawtucket Patriot Ale (or two) without having to leave the comfort of your local New New York suicide booth!

Animation Throwdown: The Quest for Cards will launch with a multiverse of morally-questionable content and game features that fans will love, including more than 460 battle cards with over 300 hilarious combos, as well as new content, campaigns, and PvP experiences more varied than Quagmire’s collection of “art”.

The highly anticipated free-to-play game has been launched by Fox Digital Entertainment and Kongregate, a leading publisher of mobile and web games and a wholly-owned subsidiary of GameStop Corporation. Kongregate co-developed the title with Chicago-based Synapse Games (developer of Tyrant Unleashed, Global Assault, and Spellstone) and San Francisco-based Chinzilla Games (developer of Little Alchemist).

Animation Throwdown: The Quest for Cards is free and now available on both iOS and Android devices. The game will be coming soon to other platforms, including kongregate.com.