Standard store items, hard currency sales, and limited-time promotions may provide a consistent revenue boost for your game at a high level. But what type of players are buying those items? More often than not, the players making purchases are veteran players who have made several purchases already, while most of the overall playerbase has yet to convert.

New Buyer Packs (NBPs) are a great way to get new players to convert to paying players. An optimal combination of pricing, timing, and value is beneficial to both the game studio and the players.

Effects of Adding an NBP

We launched a game without an NBP and added one a few months later. The boost to conversion was noticeable and sustained. The graph below shows the percentage of players making a purchase within one day of installing the game. Before the NBP, we saw 0.68% of players converting. After implementing the NBP, we saw that number increase to 0.9%. That boost was sustained for the lifetime of the game. This boost is also reflected in Day 2, 3, 7, etc. conversion. 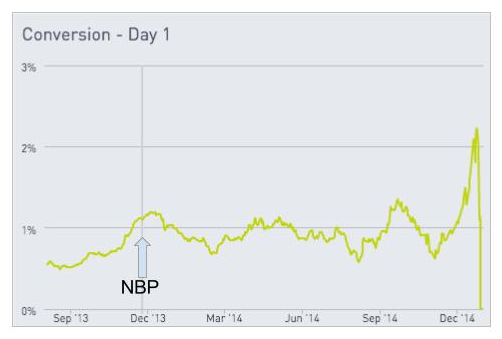 A fair concern is that the NBP may harm monetization later in a player’s lifetime, because NBPs often give high up-front value compared to other store items. When balanced properly, an NBP will not hurt longer-term monetization. The same NBP from above, which increased conversion, had no impact on Day 30 payer behavior. The graph below shows how much paying players spend by Day 30 of gameplay. We see that spending is unchanged with the addition of an NBP. 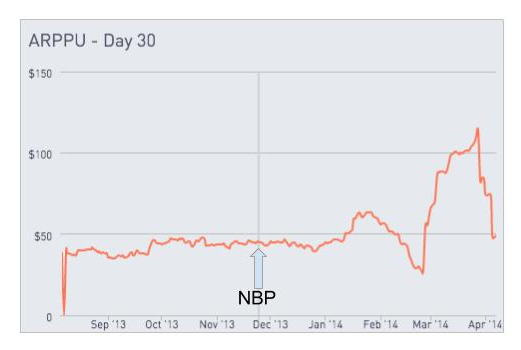 Of course, ideally we’d want spending to increase. However, in this case, higher conversion with sustained spending per payer results in overall higher revenue.

In one case, we offered two items at the same time to players, positioned side-by-side. One item gave 300 resources for $8, and the other gave 150 resources for $4. Notice that the items are identical and there is no added bonus for buying at the higher price point. In other words, the number of resources per dollar ratio is the same for both. In the charts below, we see that the $8 price point accounted for 99% of revenue between the two items, and 97% of quantity sold. Players had a clear preference for the $8 item. The absolute difference between $8 and $4 is small, and pricing an NBP near the $8+ mark will yield better results than pricing at a low price point. 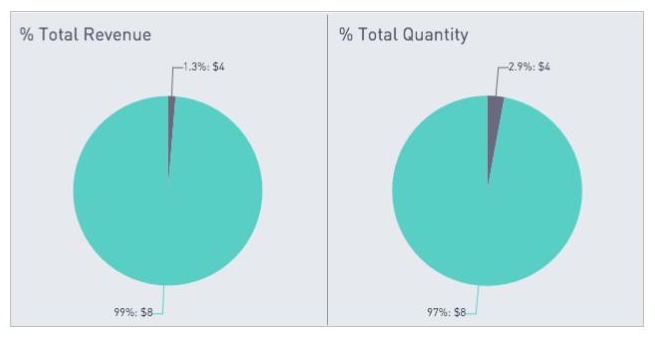 Repeat Purchases After the NBP

A well-designed NBP can also produce high rates of repeat purchases. In one game, 74% of players who bought the NBP went on to make a subsequent purchase. The chart below shows the top 5 in-app purchases (IAPs) players usually make first in the game, and the repeat purchase rates for those IAPs. The NBP is second to the $19.99 standard IAP in repeat rates. This is important because the more players spend on their first purchase, the more likely they will become a repeat spender and an extremely dedicated player. NBPs can encourage similar buying and playing behavior, but at a lower price point that is more accessible to everyone.

An example of a very compelling NBP is the one available in one of our games, BattleHand (iOS and Android). In terms of contents, the best way to think about this is to compare a game to a hobby. What do you need to include in a beginner’s package for someone starting a new hobby? You want the contents to be good and comprehensive. However, you don’t want to give out the best items at first because they will be expensive and players may not understand their true value. For example, say you want to pick up photography. Most likely, you will not buy a top-of-the-line camera out the gate, because it will be very expensive and many of its features are only useful at an advanced level. Beginners want a photography package that includes a decent camera, a couple of basic lenses, a tripod, basic editing software, and some camera maintenance tools. Higher quality and more expensive equipment can be purchased later when you have a deeper understanding of photography and want to pursue it further.

Similarly, the NBP in BattleHand contains the following items to aid players in all areas of the game:

Lastly, timing when the NBP is shown to players is very important. Players need to understand the value and importance of all the items before they are shown the NBP promotion. If surfaced too early, players will not feel compelled to purchase. If surfaced too late, most players may have left the game already. It’s a delicate balance and NBP design should be part of your discussions around the game’s tutorial. On a more specific note, the NBP should appear within 3 to 5 sessions since install, depending on your game. Additionally, limiting its availability to 3 to 5 days will urge players to make a quicker purchase decision.

Monetization in free-to-play games is important for the game developer and publisher. This helps us continue to create new game features and make new and awesome games. Our games are truly free! We are greatly thankful for all our players, and we do not require them to spend money at any point. The tactics we shared in this article make sure that there is value for both the players and the developers.