Jon, creator of the new Stencyl free Flash game development suite, was kind enough to answer some questions and talk a bit more about his project. As a quick terminology note, "Stencyl" is a general term for the product, while StencylWorks is the creation tool that works along side other tools like StencylForge.

Kongregate: So, what exactly is StencylWorks?

Jon: StencylWorks is the tool that brings game creation to everybody. We take out everything that isn't fun about game creation, so that you can focus on “finding the fun” by creating great games. In addition to the tool itself, we provide a marketplace for sharing and downloading game assets as well as frameworks that facilitate building common game genres such as platformers.

Our goal is to provide tools that grow along with the user, from humble beginnings to mastery. Everybody starts somewhere. I personally started game creation editing campaigns and maps for Starcraft and Warcraft before moving on to bigger and better things. Many indies I know started with game creation tools rather than programming.

At the end of the day, no matter what tool or method you use, you pick up fundamental skills that stick with you for the rest of your career, and it’s these same skills that help you make great games. Stencyl isn’t just about easy game creation, but about building this toolbox of key skills that you’ll take along with you should you decide to “graduate” to programming.

Kongregate: What experience and skills do one need to use StencylWorks to make a game?

Jon: The most important skill to bring to the table is the ability to think logically. Although we take out the grittier aspects of game creation, such as dealing with syntax and implementing collision detection, you still need to think logically to put together a game.

Besides that, being able to draw nice graphics also helps. It seems trivial, but I can’t count how many times someone got hung up on graphics alone and couldn’t bring themselves to progress without them.

It helps immensely to have built some kind of game in the past to completion. Finishing the last 10% is the hardest part, and putting your game out exposes you to the “soft” aspects of the game creation process such as responding to user feedback and marketing. These are things you have to experience at least once to pick up.

Kongregate: StencylWorks is accessible to people new to game development, but is it powerful and flexible enough to interest experienced Flash devs?

Jon: While StencylWorks was designed to be accessible to newcomers, it lets advanced users or those wanting to tinker more with the system write ActionScript to build their game logic. In the future, we plan to allow libraries to be linked to the engine to expand its capabilities.

Whether a developer uses StencylWorks or not comes down to their particular needs. Some are very comfortable with a developer's workflow, and no tool, no matter how good it is, is going to sway that. Others are strapped for time and are looking for a solution that accelerates their time to market. And some, as we roll out iOS, Android and HTML5 support, are looking for a practical and quick way to build a game for those platforms, even as programmers.

Kongregate: What technologies are running under Stencyl's hood?

Jon: The toolset itself is written in Java, which we chose because it's easy to develop with, runs on all major operating systems and lets us build a great looking UI. The Flash runtime is powered by Flixel and Box2D. The iOS runtime is based on Sparrow, a Flash-like game framework.

Kongregate: Tell us a little about StencylForge. Will developers eventually be able to sell their assets and code with it?

Jon: StencylForge is a marketplace for sharing and downloading game assets. It’s a place to find that “something” that your game is missing, whether it’s a bit of placeholder art for a game prototype or a turnkey health system for your next game.

So far, nearly 500,000 resources have been served from a selection of close to 10,000. With this increased scale, some issues and challenges have arisen with the current system related to organization, asset discovery and communication between asset authors and end users.

We’re working on a redo of StencylForge that’s more collaborative and social in nature, in a similar fashion to how Github has modernized the code hosting experience. It will end up looking something like this: 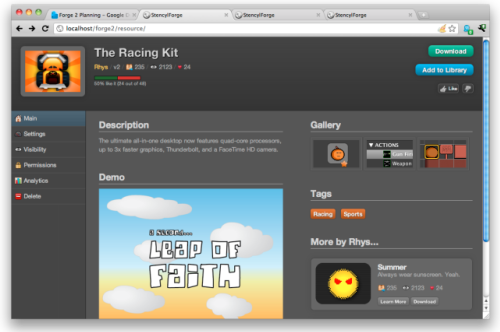 Following that redo, we'll launch Stencyl Market, a place where our developers and artists can sell their assets and code under a revenue share model. The store won’t be fully open for anybody to set up shop. We’ve learned from today’s StencylForge that an approval process to filter out the noise and only promote good content is key. We’re going to work with key members of our community and outside of it to ensure that the market is seeded with quality content.

Kongregate: What does the workflow look like with StencylWorks? What tools do developers typically use alongside StencylWorks?

Jon: As the creator, it's fascinating to see developers using the toolset in ways I never imagined or intended. I originally intended StencylWorks to follow a pipeline kind of workflow in which there were 4 main phases - asset gathering, creating logic, building/testing, and finally publishing. In reality, everyone uses StencylWorks differently, and numerous suggestions have come in from different camps, some who like a more centralized interface and some who like it as it is today.

Many developers use a graphics editor (such as Photoshop or GIMP) alongside StencylWorks. Some compose their own music and sound effects from scratch.

Kongregate: What advantages does StencylWorks provide over using the Adobe IDE or FlashDevelop?

Jon: A programming IDE like Flash Develop is designed for programmers who want to do everything on their own. The Adobe IDE on the other hand, is a powerful solution for a professional's workflow but is also a daunting one to learn for a new user, not to mention its cost.

StencylWorks' key advantage over more-specific tools is its all-in-one nature. We like to think of StencylWorks as a "game studio in a box." It brings all the necessary ingredients for game creation together into one place. Although you give up a little bit of control, what you get in return is a quicker and easier way to build games.

Kongregate: What limitations does StencylWorks have compared to other IDEs? Are there any types or scales of games that would be out of Stencyl's scope? How well can it handle vector graphics?

Jon: Today, StencylWorks doesn't provide full access to edit a game's source, even though it has programming capabilities built in. The built in code editor isn't comparable to Flash Develop, but we plan to open this part to the community to improve and extend it. Vector graphics are converted to bitmap images upon importing, mainly because Flixel wasn't built to work with them.

StencylWorks only supports Flash and iOS at the moment, but we are turning our attention to Android and HTML5 as our users demand a universal way to build their games for multiple platforms.

Massive games such as MMORPG's are discouraged, but who doesn't discourage those? Other kinds of games that are out of scope at the moment include isometric games (Final Fantasy Tactics), multiplayer games and 3D games. Clever users have figured out ways to do each, but it’s not something we’d recommend doing in practice.

Kongregate: What sort of new features and tools are planned for Stencyl's future?

Jon: Our biggest upcoming product is iStencyl, our iOS exporter, which is in private beta. With iStencyl, anyone will be able to create games for their iPhone, iPod touch and iPad (for a fee, which we'll make official when we launch iStencyl). Developers, regardless of whether they're on a Mac or a PC, will be able to test their games on their iOS devices. We'll support the essentials from the get go - Game Center, iAds, Retina Display, iPad, and more. Here's a screenshot of it in action: 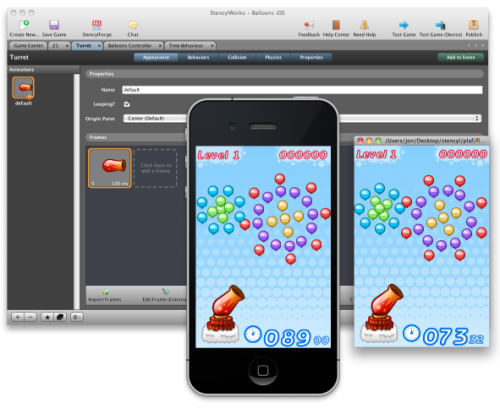 Following closely will be our brand new take on StencylForge that was described earlier, Stencyl Market and support for Android and HTML 5.

Within the tool itself, we’ve lined up new features and improvements to address the feedback we’ve been hearing consistently across user groups. Support for Mochi Ads / Scores is coming soon as is general support for extending the engine with plugins or libraries. We’re working on both ends of the “coding” spectrum to improve ease of use for all users and bolster our programming support.

All in all, there’s a lot of work ahead for us, but we’re excited about making this all happen.

Be sure to check out Stencyl yourself.