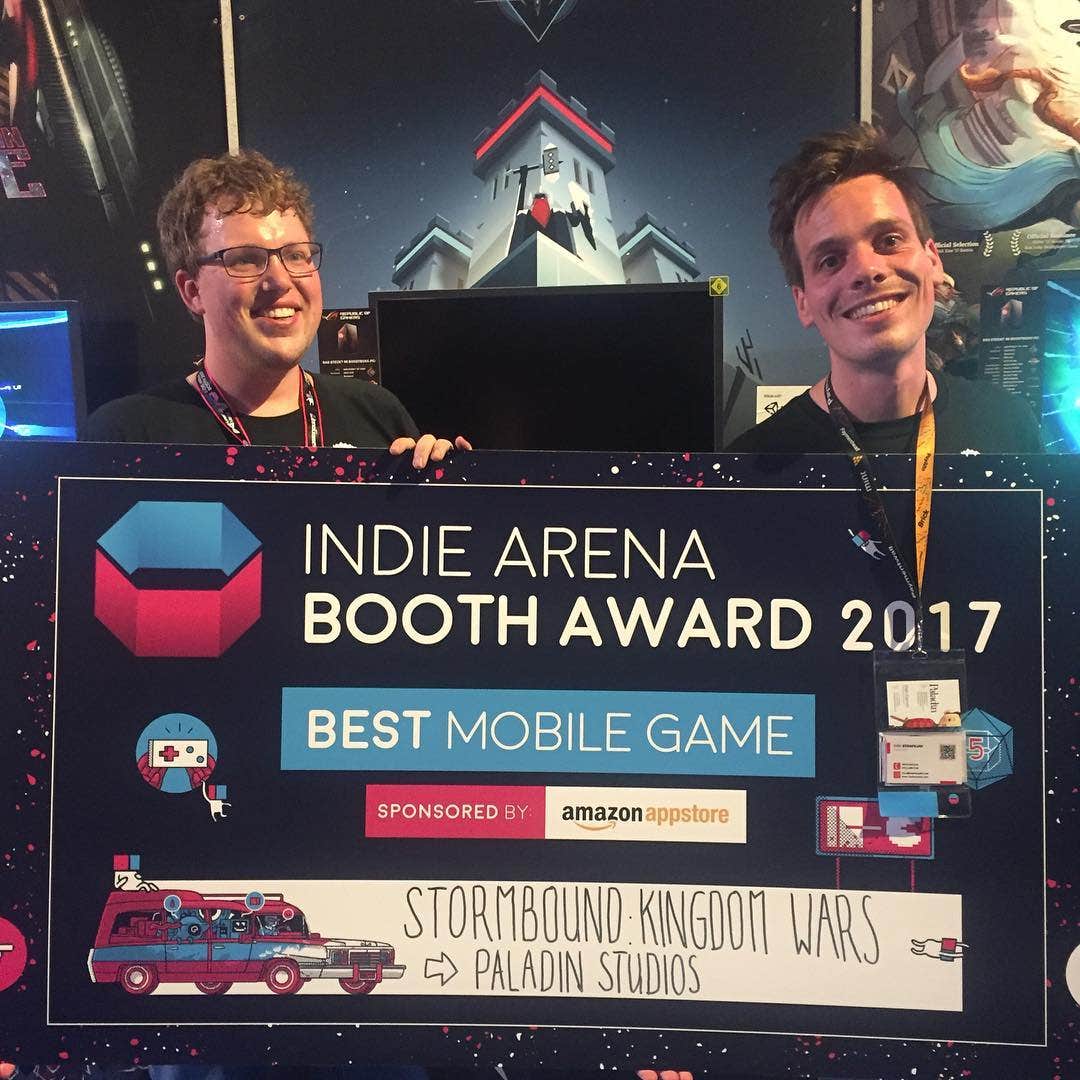 We sat down with the team who works on Stormbound to learn more about their studio and development process. When not developing the next smash hit, they enjoy “Thundering Thursday,” an after-hours event full of food and board/video games.

KONG: Paladin Studios is an independent development studio located in The Netherlands; can you give our readers a better understanding of how Paladin came to be and what types of games you have released so far?

DERK: Paladin was founded in 2005, when I joined forces with a buddy of mine to create a “cool development studio.” Back then, we worked on technical challenges for things like simulators and interactive visualizations. Basically using game technology for anything except games... and after several years of doing that, we got tired of that. My co-founder left, and I decided to pursue the dream of actually making entertainment games. Our first game was “Jimmy Pataya,” a project where the goal was to get a game from initial idea to App Store in two weeks. After that, we spent nearly two years on Momonga Pinball Adventures, and that opened doors for us in the mobile games world. We partnered with DeNA to create Wondergolf and Rob & Roll, and with Bandai Namco to create Galaga Wars. These are all pretty casual games, arcade titles, so Stormbound is our first “mid core” game.

KONG: Stormbound is a clever mix of board game strategy and card battling. How did you come up with this idea and what has changed from the initial idea to the final design?

JENS: The initial idea for this game was developed during an internal game jam. It started as a tile-placement game where you would defeat and convert the opponent’s tiles, which resulted in quick back-and-forth matches.

A lot has changed since then, in particular the rules for placement, combat and movement. Some examples: 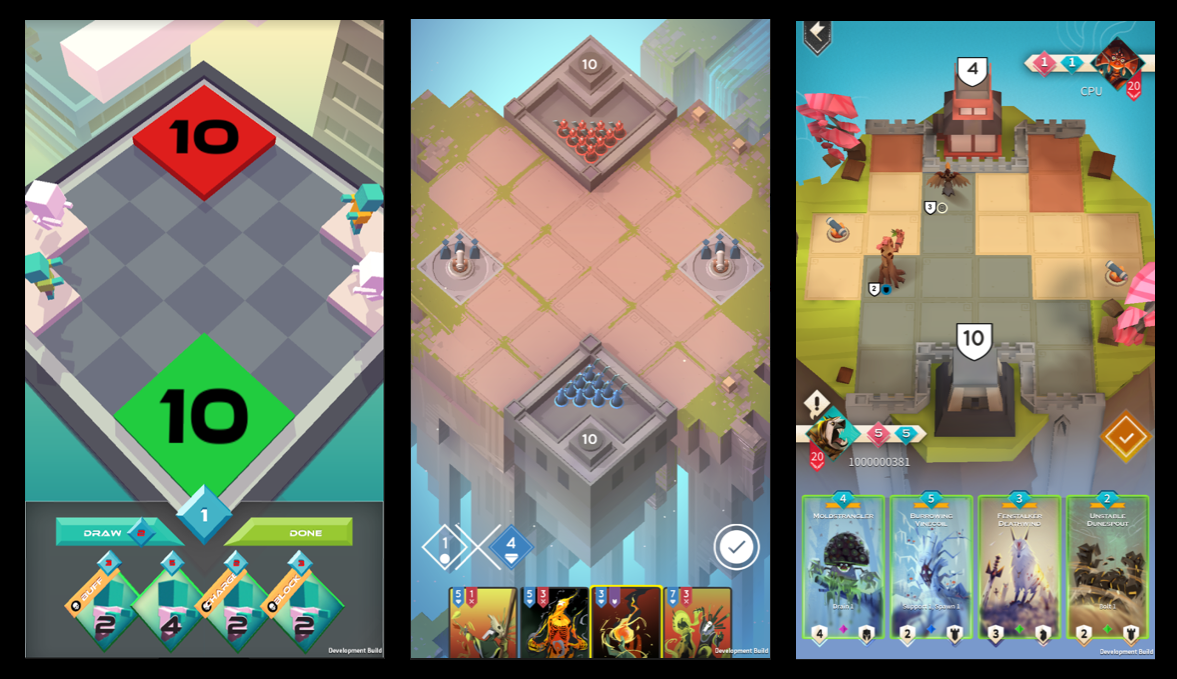 KONG: What challenges, if any, did you face when developing for live PVP battles? Is there any advice you’d give to a developer who is tackling live turn-based actions for the first time?

NIELS: Don’t start too early going to backend gameplay. We thought we nailed the gameplay in our prototype and implemented all the gameplay on the server. But when we weren’t happy with all the rules yet, it was a hard and slow process to iterate on the backend. And it takes a lot of refactoring.

Because our gameplay runs on the server, the client doesn’t know everything it sometimes needs for animations and timing. This disconnect was a tough challenge and prevented flexibility. We built a system that sends a list of tasks from the server. The client receives this and plays the list step-by-step, where all individual components listen to relevant messages and report when their animation is finished. Once we had this system in place we got a lot more flexibility.

Another issue we encountered a lot was how easy it was to lose messages when the connection isn’t stable at any point from the phone to the server. Similarly, messages can take a while to transmit, so a “play card” message can be received after the turn timer has ended. Both can result in the game becoming unplayable. These are the hardest things for us to solve, and we’re still working on improving it.

KONG: Stormbound has four distinct kingdoms that allow for multiple deck types. What are your favorites to play and why?

JENS: In every card game I’ve played, I’ve always preferred to switch regularly between decks. And it’s no different in Stormbound. Lately the kingdom I use most often is that of Shadowfen, since it allows me to be versatile and has potential solutions for most problems the opponent could throw at me. Other decks I often play with include an aggressive pirate Swarm deck, a controlling Ironclad deck filled with constructs and structures, or a combo deck with Winter cards.

KONG: Are there any cards or deck types that did not make the final design?

JENS: We’ve prototyped many different cards and abilities, which in the end didn’t make it into the game. A good example is that we used to have ranged units, which instead of moving would attack anyone within range. We scrapped these, as they were very powerful and difficult to predict for the opponent. These cards changed into some abilities of the Ironclad Union, who can shoot far in front of them.

All deck types we designed for have all made it into the game, and we have plenty of ideas to extend it further!

KONG: Congratulations on all of the accolades that Stormbound has received! It's been awarded multiple developer awards and received prominent featuring across the Google Play and Apple app stores. What do you think is resonating with both developer communities and the platforms?

REGINA: Thank you very much! I think the first and foremost aspect that attracts new players to the game is the unique art style of Stormbound. There are plenty of CCG or strategy games out there, but Stormbound has its unique look that we love: its minimalist and elegant esthetics. Kudos to our amazing art team. But that’s just the first step. After the first impression, players discover that the game is deep and strategic; they are invited to play it slowly and thoughtfully. And that’s the enjoyment that you don’t come across very often in mobile games. Also, the characters are fun to look at; there’s humor in their descriptions. All in all I think that what the developer communities and the platforms like about Stormbound is the love that we managed to put into every detail of the game. There’s a lot to improve, though, and our plan is to keep making it better.

KONG: How has it been developing games in The Netherlands? Are there any communities and resources that your studio has utilized during your time making games?

DERK: The Netherlands is a great breeding ground for creative indie developers. There are several studios and solo devs who come together regularly, to play each other’s upcoming games and provide feedback. Other than that the government has provided financial support for Stormbound through the Gamefonds program and WBSO program, which eases the funding pressures a bit.

KONG: Based on your previous experiences, what advice would you give to indie developers who are just starting out or are about to release their first game?

DERK: It’s super tough to get a game to launch, and I recommend keeping your game as simple and small as possible. This reduces the risks associated with funding, timelines, scope creep and lots of other potential issues. Make sure to reserve plenty of time and budget for unforeseen things -- you can count on the fact that you don’t know what you don’t know. Even after years of development, we are still facing these issues, because every game is different. They all require experimentation and iteration to get them just right. So keep it simple, don’t give up, and prepare so that you can survive even the worst-case scenario.

KONG: Now that Stormbound has launched worldwide, what’s next for Paladin and the game?

REGINA: It is fantastic that Stormbound has finally reached its audience and we have it globally launched. That brought tons of ideas and suggestions both from the players and from the team. There are things that would be great to have in the game -- for example, the ability to challenge your friends. Honestly, we didn’t expect this feature to be that popular, but we realized that with this kind of game this is a very logical development, and we saw that both at Gamescom and from the players’ reviews. We are also planning to add more cards, a "casual" mode that would allow players to enjoy the game apart from the ranked competition, and more quests per day so that players have more sources of rewards. These plans are quite early in production, so we can’t yet promise when these will be ready, but we are planning to release the improvements bit by bit in regular updates.

DERK: For Paladin, we have two more games lined up for soft launch later this year, and tons of early concepts lying around that we are currently prototyping and developing. So stay tuned!